3)In the figure, each region T represents an equilateral triangle and each region S a semicircle. The complete figure is a semicircle of radius 6 with its centre O. The three smaller semicircles touch the large semicircle at points A, B and C. What is the radius of a semicircle S? 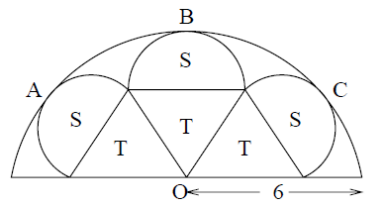 7)There are ten prizes, five A’s, three B’s and two C’s, placed in identical sealed envelopes for the top ten contestants in a mathematics contest. The prizes are awarded by allowing winners to select an envelope at random from those remaining. When the eight contestant goes to select a prize, what is the probability that the remaining three prizes are one A, one B and one C?

8)Nine spheres are placed in a closed cubical box of side lenth 32 cm. Four small spheres of radius r are first placed in the bottom corners of the box so that they touch adjacent sides of the box but not each other. A large sphere of radius 15 cm is then placed in the box so that it touches each of the four smaller spheres but not the bottom. Four spheres of radius r are then added in the upper corners and the box closed so that the lid just touches the four smaller spheres. Calculate r.

3)Alphonse and Beryl play a game by alternately moving a disk on a circular board. The game starts with the disk already on the board as shown. A player may move either clockwise
one position or one position toward the centre but cannot move to a position that has been previously occupied. The last person who is able to move wins the game. 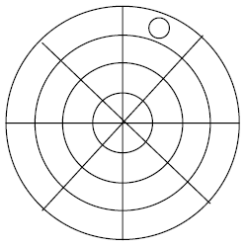