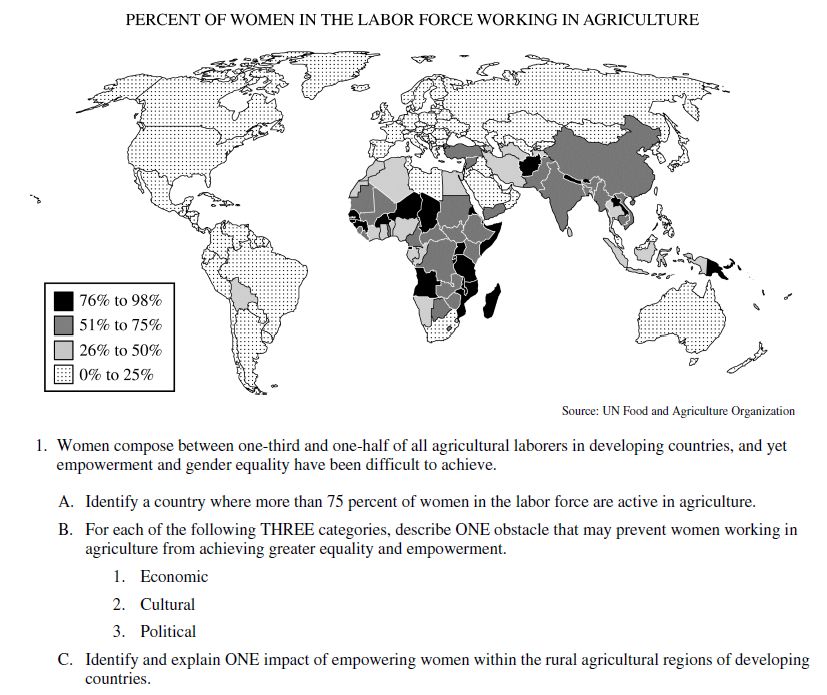 Economic.（job opportunity ,economic sector 等经济相关的都可）There are not enough job opportunities. Many less developed countries are still involved in primary economic activities, women and children are seen as an economic asset, providing labor on the farm. Women do not have equal job opportunities as men.

Cultural. In many countries, girls are discouraged from gaining education, boys are more likely than girls to be high school graduates. So women may be less productive in their jobs.

Political. Long-standing legal obstacles can limits women’s participation in empowerment. There are no laws to protect the ability of women to achieve improvements in their own status-that is ,to achieve economic and political power.

从文化、政治、经济、社会等多个方面作答都可以。Empowering women within the rural agriculture regions of developing  countries may promote the country to achieve a higher level of economic development. More and more women could participate in the workforce and increase the productivity. 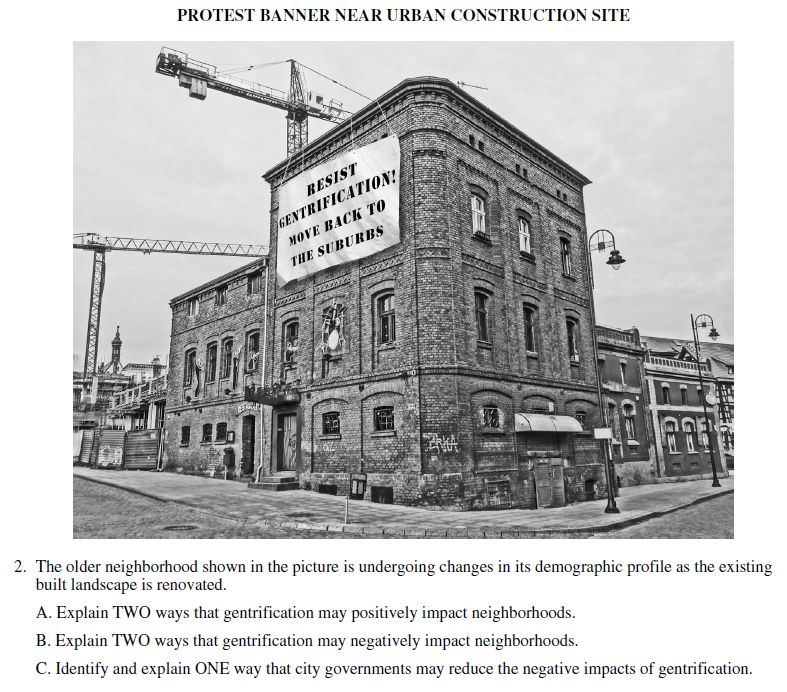 One positive impact is that gentrification may increase the property value. The community’s social elites maintain the inner-city neighborhoods as enclaves of expensive property.

Another positive impact of gentrification is a beautiful urban neighborhood. Because gentrification could increase the taxes, the city uses the expanded tax revenue to build parks.

The first negative impact is that people with lower incomes are forced to move out of the gentrified neighborhoods because the rents in the area suddenly become too high for them.

The second negative impact is that middle and upper classes may replace low-income population and change the social character of certain neighborhoods. So the result of gentrification may lead to social conflicts.

1. Relocation diffusion means the spread of an idea through physical movement of people from one place to another.Popular culture could spread by migration. When people move,they carry with them their culture including language, religion and ethnicity.

2. Contagious diffusion is the rapid, widespread diffusion of a characteristic. Popular culture could diffuse through Internet. Web surfers throughout the world have access to the same popular material simultaneously and quickly.

3. Hierarchical diffusion is the spread of an idea from persons of authority or power to other persons or places. So new culture could diffuse from political leaders, social elite people to others.

C
One barrier is the underdevelopment of technology. Popular culture could spread quickly throughout the whole world by advanced technology. So in less developed countries, new words diffusion could face barriers for lack of wide distribution of visual media.

Another barrier is cultural belief,especially religion. Some words are forbidden to use in certain religion, this may prevent the diffusion of new words in this area.