15, from The Harker School in San Jose, Calif. 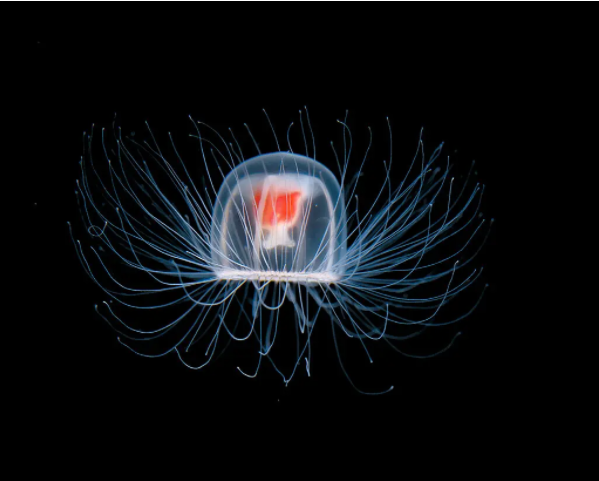 Two thousand years ago, the first emperor of China became obsessed with acquiring immortality, ruthlessly deploying his empire’s vast resources toward this quest. Unfortunately, Qin Shi Huang died at the age of 49 from ingesting mercury, which he mistakenly believed to be the elixir of life. Could the secret that eluded the powerful emperor, and the rest of humanity, be instead found in a humble jellyfish smaller than a fifth of an inch?

In 1988, Christian Sommer, a young German marine biologist on vacation in Italy, stumbled upon a peculiar trait in a known species of jellyfish. Instead of always growing older, Turritopsis dohrnii could seemingly reverse time until it reached the youngest stage of its development and began aging again. We now know that the adult jellyfish, also called a medusa, can transform into its youngest state, a polyp, in response to stressful conditions such as physical damage and starvation. An analogue of this “reverse metamorphosis” would be an adult butterfly that, when faced with danger, would transform into a caterpillar and would later grow back into a butterfly. Moreover, this magical insect would be able to repeat this process over and over again!

In order for the so-called “immortal jellyfish” to accomplish its curious transformation, its adult cells, which are already specialized for specific purposes, need to change into entirely different types of specialized cells. Turritopsis dohrnii represents the only known instance of this reprogramming process, called transdifferentiation, occurring in nature. However, there is considerable scientific interest in identifying artificial ways to repurpose cells in order to help reverse degenerative diseases. For example, heart failure is usually caused by the lack of healthy cardiac muscle cells called cardiomyocytes. This could be addressed by reprogramming other heart cells, such as widely available fibroblasts, into new cardiomyocytes. Similarly, the transdifferentiation of adult liver cells into insulin-producing pancreatic cells could help reduce the impact of diabetes.

While Turritopsis dohrnii can be challenging to keep in the lab, being sensitive to temperature and diet, its transdifferentiation can be readily stimulated and occurs within 48 to 72 hours, making the process easy to study. Maria Pia Miglietta, an associate professor of marine biology at Texas A&M University at Galveston, is studying the messenger RNA molecules of the animal throughout various stages of its “life,” both during regular and reverse metamorphosis. Dr. Miglietta’s research identifies biological processes that are significantly over- and under-expressed across these stages, unlocking clues for artificially inducing transdifferentiation of cells in other organisms.

Despite its nickname, Turritopsis dohrnii is not really immortal in the manner that Qin Shi Huang aspired to be; it can easily be killed by predators or die of disease. However, its ability to reverse the aging process by reprogramming its cells could help develop treatments for some of humanity’s most widespread diseases. And that would bestow an undying legacy on this tiny sea creature.

“The Immortal Jellyfish.” American Museum of Natural History, 4 May 2015.

Rich, Nathaniel. “Can a Jellyfish Unlock the Secret of Immortality?” The New York Times Magazine, 28 Nov. 2012.