Kim's flight took off from Newark at 10:34 AM and landed in Miami at 1:18 PM. Both cities are in the same time zone. If her flight took

Which of the following is equal to

What number is one third of the way from

Four coins are picked out of a piggy bank that contains a collection of pennies, nickels, dimes, and quarters. Which of the following could not be the total value of the four coins, in cents?

One dimension of a cube is increased by

, another is decreased by

, and the third is left unchanged. The volume of the new rectangular solid is

. Which of the following is equal to

for every pair of integers

The first three terms of an arithmetic sequence are

th term of the sequence is

Four congruent rectangles are placed as shown. The area of the outer square is

times that of the inner square. What is the ratio of the length of the longer side of each rectangle to the length of its shorter side?

is an integer. What is

shown are the first in a sequence of figures. For

had on each side of its outside square. For example, figure

diamonds. How many diamonds are there in figure

How many positive integers less than

times the sum of their digits?

miles in a straight line from

, turns through an angle between

, and then sails another

be measured in miles. Which of the following intervals contains 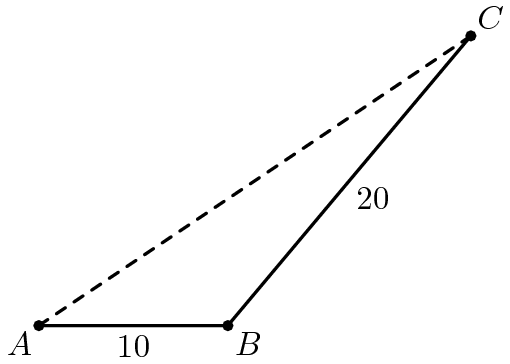 A triangle has vertices

divides the triangle into two triangles of equal area. What is the sum of all possible values of

For what value of

A circle with center

is tangent to the positive

-axes and externally tangent to the circle centered at

. What is the sum of all possible radii of the circle with center

be two different infinite geometric series of positive numbers with the same first term. The sum of the first series is

, and the sum of the second series is

be the number of factors of

in the prime factorization of

. What is the maximum value of

Andrea inscribed a circle inside a regular pentagon, circumscribed a circle around the pentagon, and calculated the area of the region between the two circles. Bethany did the same with a regular heptagon (7 sides). The areas of the two regions were

, respectively. Each polygon had a side length of

. Which of the following is true?

have equal areas. What is

are complex numbers. Suppose that

What is the number of nonreal zeros of

A regular octahedron has side length

. A plane parallel to two of its opposite faces cuts the octahedron into the two congruent solids. The polygon formed by the intersection of the plane and the octahedron has area

, and the graph of

contains the vertex of the graph of

-intercepts on the two graphs have

, in increasing order, and

are positive integers, and

The tower function of twos is defined recursively as follows:

. What is the largest integer