On a particular January day, the high temperature in Lincoln, Nebraska, was

. In degrees, what was the low temperature in Lincoln that day?

Mr. Green measures his rectangular garden by walking two of the sides and finds that it is

steps. Each of Mr. Green’s steps is

number counted. When counting backwards from

number counted. What is

miles per gallon of gasoline, and Tom's car averages

. The average age of

of their parents is

. What is the average age of all of these parents and fifth-graders?

to one more than the last number said by the other person. Jo starts by saying

, so Blair follows by saying

has positive slope, goes through point

. What is the slope of

Two bees start at the same spot and fly at the same rate in the following directions. Bee

foot upwards, and then continues to repeat this pattern. Bee

foot west, and then continues to repeat this pattern. In what directions are the bees traveling when they are exactly

feet away from each other?

are connected by roads

. How many different routes are there from

that use each road exactly once? (Such a route will necessarily visit some cities more than once.) 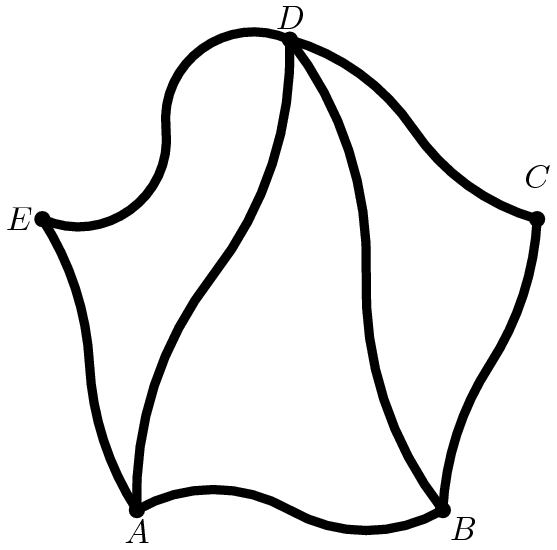 The internal angles of quadrilateral

. Moreover, the angles in each of these two triangles also form an arithmetic progression. In degrees, what is the largest possible sum of the two largest angles of

Two non-decreasing sequences of nonnegative integers have different first terms. Each sequence has the property that each term beginning with the third is the sum of the previous two terms, and the seventh term of each sequence is

is expressed in the form

be an equiangular convex pentagon of perimeter

. The pairwise intersections of the lines that extend the sides of the pentagon determine a five-pointed star polygon. Let

be the perimeter of this star. What is the difference between the maximum and the minimum possible values of

be real numbers such that

Barbara and Jenna play the following game, in which they take turns. A number of coins lie on a table. When it is Barbara’s turn, she must remove

coins, unless only one coin remains, in which case she loses her turn. When it is Jenna’s turn, she must remove

coins. A coin flip determines who goes first. Whoever removes the last coin wins the game. Assume both players use their best strategy. Who will win when the game starts with

coins and when the game starts with

Barbara will win with

coins and Jenna will win with

Jenna will win with

coins, and whoever goes first will win with

Barbara will win with

coins, and whoever goes second will win with

Jenna will win with

coins, and Barbara will win with

Whoever goes first will win with

coins, and whoever goes second will win with

. The length of segment

are the vertices of a trapezoid. What is

Consider the set of 30 parabolas defined as follows: all parabolas have as focus the point (0,0) and the directrix lines have the form

with a and b integers such that

be integers. Suppose that the product of the solutions for

is the smallest possible integer. What is

and writes both its base-5 and base-6 representations on a blackboard. Later LeRoy sees the two numbers Bernardo has written. Treating the two numbers as base-10 integers, he adds them to obtain an integer

. For how many choices of

are the two rightmost digits of

, in order, the same as those of

be a triangle where

is the angle bisector of

be the intersection of the median

be the set of polynomials of the form

has distinct roots of the form

integers. How many polynomials are in