Mr. Green measures his rectangular garden by walking two of the sides and finding that it is

steps. Each of Mr. Green's steps is

On a particular January day, the high temperature in Lincoln, Nebraska, was

. In degrees, what was the low temperature in Lincoln that day?

number counted. When counting backwards from

number counted. What is

are each less than

. What is the smallest possible value for

Six points are equally spaced around a circle of radius 1. Three of these points are the vertices of a triangle that is neither equilateral nor isosceles. What is the area of this triangle?

Three positive integers are each greater than

, have a product of

, and are pairwise relatively prime. What is their sum?

be the set of sides and diagonals of a regular pentagon. A pair of elements of

are selected at random without replacement. What is the probability that the two chosen segments have the same length?

to one more than the last number said by the other person. Jo starts by saying "

", so Blair follows by saying "

. Which of the following describes the set of points

A wire is cut into two pieces, one of length

and the other of length

. The piece of length

is bent to form an equilateral triangle, and the piece of length

is bent to form a regular hexagon. The triangle and the hexagon have equal area. What is

has the property that its units digit is the sum of its other digits, that is

. How many integers less than

form an arithmetic sequence with

has exactly one root. What is this root?

is expressed in the form

Two non-decreasing sequences of nonnegative integers have different first terms. Each sequence has the property that each term beginning with the third is the sum of the previous two terms, and the seventh term of each sequence is

has its center at

. Each of the vertices and the center are to be associated with one of the digits

, with each digit used once, in such a way that the sums of the numbers on the lines

are all equal. In how many ways can this be done? 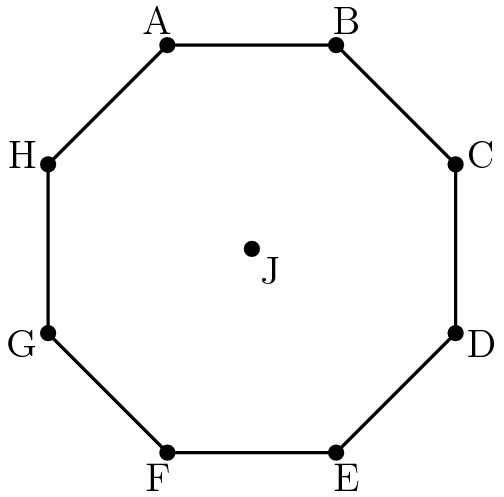 . The length of segment

is nice if there is a positive integer

with exactly four positive divisors (including

) such that the sum of the four divisors is equal to

. How many numbers in the set

and writes both its base-5 and base-6 representations on a blackboard. Later LeRoy sees the two numbers Bernardo has written. Treating the two numbers as base-10 integers, he adds them to obtain an integer

, and LeRoy obtains the sum

. For how many choices of

are the two rightmost digits of

, in order, the same as those of