A 5 cm length of wire is at 90° to the direction of an external magnetic field. When a current of 1.5 A flows through the wire it experiences a force of 0.06 N from the motor effect.

Calculate the magnetic flux density of the magnet.

Step 1: List the known quantities
Step 2: Write out the equation for magnetic force

F = BIL
Step 3: Rearrange the equation to make B the subject

This question is about the movement of an electrically charged particle into a magnetic field. An electron enters a magnetic field and moves in an approximately circular path as shown below.

Part (a)
Part (b)
Step 1: List the known quantities
Step 2: Equate the magnetic force and the force of circular motion 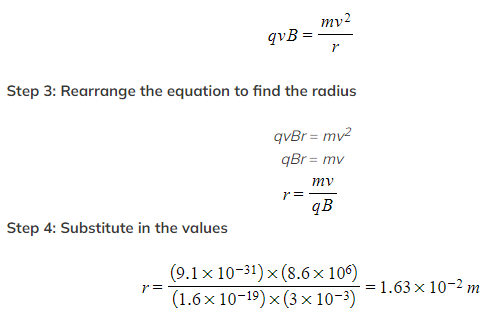