be the number of ordered pairs of integers

such that the polynomial

can be factored into the product of two (not necessarily distinct) linear factors with integer coefficients. Find the remainder when

can be written in base

, can be written in base

, and can be written in base

green cards. She shuffles the

cards and lays out

For each ordered pair of real numbers

there is a real number

Find the product of all possible values of

be the number of complex numbers

with the properties that

is a real number. Find the remainder when

A right hexagonal prism has height

. The bases are regular hexagons with side length

vertices determine a triangle. Find the number of these triangles that are isosceles (including equilateral triangles).

be an equiangular hexagon such that

the diameter of the largest circle that fits inside the hexagon. Find

Find the number of four-element subsets of

, and two distinct elements of a subset have a sum of

are two such subsets.

The wheel shown below consists of two circles and five spokes, with a label at each point where a spoke meets a circle. A bug walks along the wheel, starting at point

be the number of paths with

steps that begin and end at point 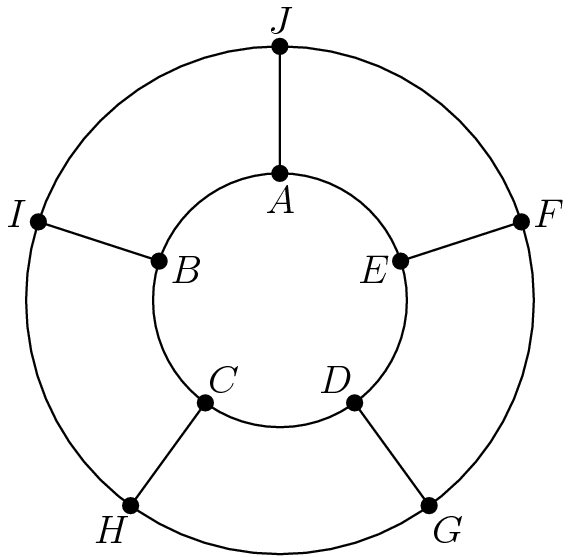 is written in base

, its two right-most digits in base

be the sum of the elements of

is chosen at random among all subsets of

be a heptagon. A frog starts jumping at vertex

. From any vertex of the heptagon except

, the frog may jump to either of the two adjacent vertices. When it reaches vertex

, the frog stops and stays there. Find the number of distinct sequences of jumps of no more than

jumps that end at

, which can each be inscribed in a circle with radius

. All three quadrilaterals have the same area

, which can be written in the form