denote the set of positive integers. Find all functions

such that for positive integers

are erected outside an acute triangle

is given. Suppose that

, such that each unit equilateral triangle has sides parallel to

, but with opposite orientation. (An example with 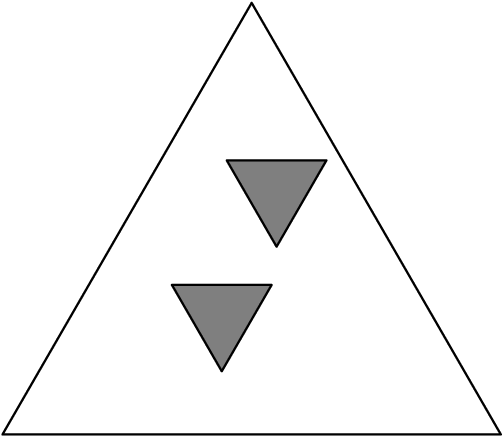 , respectively, located at the origin of the coordinate plane. In a move, Carina may move a pin to an adjacent lattice point at distance

away. What is the least number of moves that Carina can make in order for triangle

(A lattice point is a point

in the coordinate plane where

are both integers, not necessarily positive.)

of positive integers has the property that, for each

and each positive integer divisor

, there exists a unique element

Given this information, find all possible values for the number of elements of

be an integer. Find all positive real solutions to the following system of 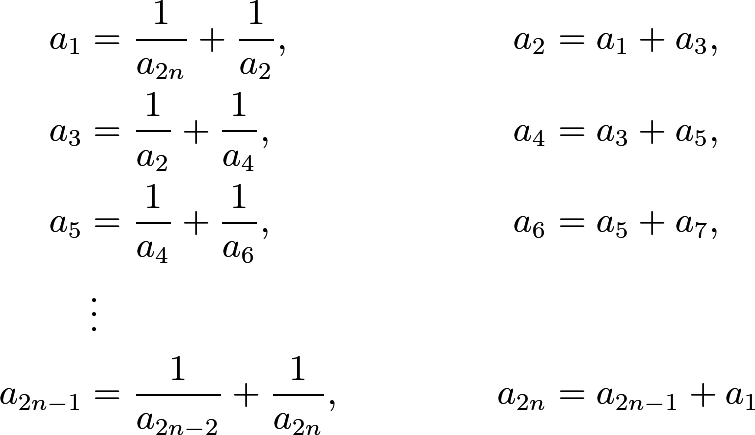 I claim that the only function

that satisfies the constraints outlined within the problem is the function

for all positive integers

We will proceed with strong induction. The base case is simple, as plugging

into the second equation given within the problem gives

can only return a positive integer value, we have that

Now we proceed with the inductive step. If the next number

, as it is either the product of two

-values that are both equal to

from the inductive assumption or is the square of an

-value that is equal to

, again due to the inductive assumption. Otherwise, we can use the Sum of Two Squares Theorem, which tells us that

has at least one prime in its prime factorization that is

and is raised to an odd power.

Proof: Note that the first condition in the problem tells us that

. Using the second condition gives us

. Plugging in the values of

Now we will attempt to repeatedly remove prime factors that are

and taken to an odd power, and we will move from the largest prime down to the smallest prime that satisfies above conditions. The prime factors will be removed by constructing a Pythagorean Triple with the prime being the smallest leg in the form of

(this will always work as

(not 3 mod 4), and this method works via Lemma 1). We will then prove the ending numbers that we achieve via removing all the

primes(which I will refer to as "tips") are equal to 1 b/c they can be expressed as the sum of two squares or is a perfect square(Sum of Two Squares Theorem). For example, if we took the number

, we would first aim to remove the

by splitting it into

to an odd power, so we transform it into

. These two don't have any divisors that are

raised to an odd power so we leave it alone, as sum of two squares will work on them or they are perfect squares.

does have a prime factor that is

, but it is an even power so we leave it alone. In this case, the tips are

. However, now we need to prove two key facts: using this Pythagorean Triple Method will never generate another

prime that is bigger than the current one we are working on or create more primes or keep the same number of primes in the tips' prime factorizations., as otherwise it could cause an infinite cycle, and also we must prove when we use Sum of Two Squares/Perfect Square given in the second condition on the tips the square root of the square(s) used will never be greater than or equal to

The first claim can be proved rather simply. Note that

can have no prime factors greater than or equal to

, as it can be factored as

, which are both less than

must be an integer due to

must being odd(not equal to

, we can prove something a bit more general.

Lemma 2: For any positive integer

, all prime factors of

Proof: Note that if

, then we also must have

. Now we can apply Fermat's Little Theorem to obtain

is a multiple of

We can simply apply Lemma 2 to

, and this means that a prime factor

will never be generated from this term. This completes the first of our two claims.

Now we proceed to the second of our two claims. Note that every time we use the method on

, we will multiply by around

(if we multiply by

which is clearly greater than

). We will never have to use the same prime twice in our method, so at max in the end we will multiply

by the product of a little less than all

primes that divide it, which is less than

greater than or equal to

(the smallest 3 mod 4 prime), meaning that the largest number that we must use two squares on that is generated by out method is less than

. We need to prove that the two squares that sum to this are both less than

, which is quite trivial, as they are less than

, which obviously means it must be less than

. This proves the second of our claims.

This completes the second case of the inductive step, and therefore completes both the induction and the problem. ~Solution by hyxue

which works but we want to prove that it's the only one. Claim: If

. Proof: We can write

and we get that

. Thus the only answer is

and we are done.

, which works. To show it is necessary, we first get

The following claim finishes the problem via induction:

Thus, the only solution is 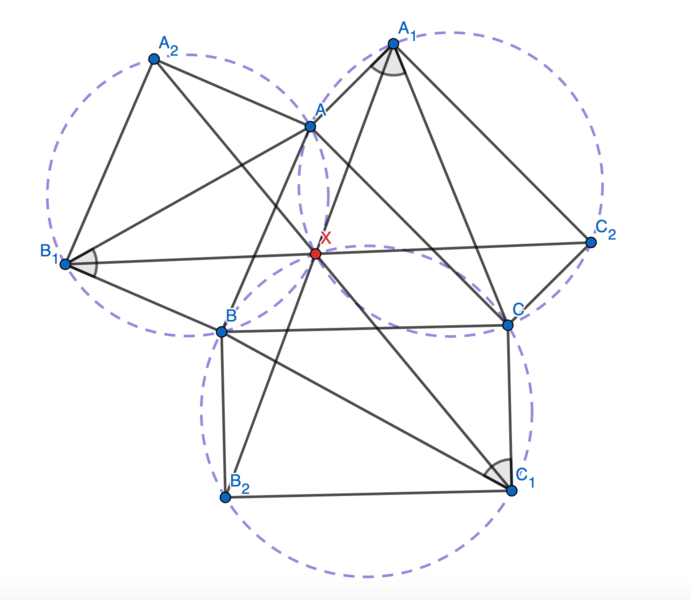 We first claim that the three circles

Let the second intersection of

is cyclic as desired.

Now we show that

are collinear, so the three lines concur and we are done.

. We now show the bound.

We first do the following optimizations:

-if you have a point goes both left and right, we may obviously delete both of these moves and decrease the number of moves by

lie on one side of the plane, for example

, we shift them all down, decreasing the number of moves by

, until one of the points is on

for the first time.

Now we may assume that

. Note we may still shift all

, decreasing the number of moves by

for the first time. So we may assume one of

, by symmetry. In particular, by shoelace the answer to 2021 JMO Problem 4 is the minimum of the answers to the following problems:

, find the minimum possible value of

, find the minimum possible value of

is maximized exactly when

is minimized. In particular, if