The summer holidays have just started, but before you can go outside and play, you have to finish all of your maths homework. Your maths teacher insists that you fill out a very specific type of Magic Square. In particular:

Three cells of the magic square have already been filled: the top-left cell, the top-middle cell, and the middle-left cell. You may fill in the remaining squares with any numbers you wish, though your maths teacher prefers some numbers over other numbers. These numbers are explained in the `Subtasks & Constraints' section. You pull out your trusty laptop and get to work!

The first and only line of input will contain three integers: A, B and C.

Anna and Bob have purchased a farm in order to train for the Annual International Olympiad for Cows (AIOC). Anna's house is on the left side of the farm, and Bob's is on the right. The farm is currently divided into N plots of land of varying width by N-1 parallel fences.

As knocking down fences is a time-consuming process, and Anna and Bob have difficulty getting along, you, an expert in the field, have been called in to determine the minimum number of fences that need to be knocked down in order to make Anna and Bob happy.

The first line of input will contain a single integer N: the number of plots into which the farm is currently divided.

The second line will contain N space-separated integers, the ith integer wi representing the initial width of the ith plot on the farm.

Your program must output a single integer: the minimum number of fences you will need to knock down in order to satisfy Anna and Bob's demands. It is always possible to do so since a farm with all fences removed gives a single plot for Anna and Bob to share.

Following your domination of the fruit sculpture market you've decided to try something new. After hours of thought you've realised the future of art will definitely be BLOCKO, specifically mass produced BLOCKO sculptures.

You've already built the assembly line which consists of a chute at a fixed position dropping BLOCKO blocks onto a conveyor belt below it. The conveyor belt moves right 1 centimetre each second. A sculpture consists of N blocks of BLOCKO, the ith of which will drop ti seconds after assembly begins, have width wi centimetres and height hi centimetres. When a BLOCKO block is dropped it will fall straight down until its bottom edge hits either the conveyor belt or a previously placed BLOCKO block, where it immediately attaches itself to the sculpture. Note that a falling block will not stop moving if it just touches corners with another block. Furthermore when each block is dropped, its right edge will be in line with the right edge of the chute and you may assume it falls into place instantly.

For instance, consider the sculpture consisting of the following 4 blocks. The first block falls after 1 second, is 2 centimetres tall, and 3 centimetres wide. 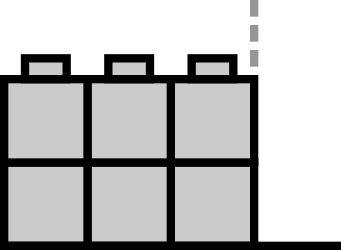 The second block falls after 2 seconds, is 1 centimetre tall, and 2 centimetres wide. 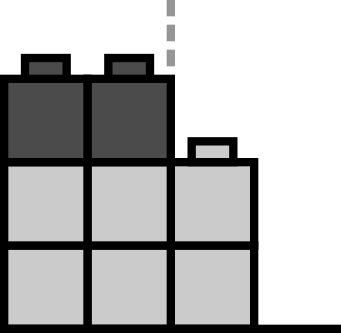 The third block falls after 3 seconds, is 1 centimetre tall, and 2 centimetres wide. 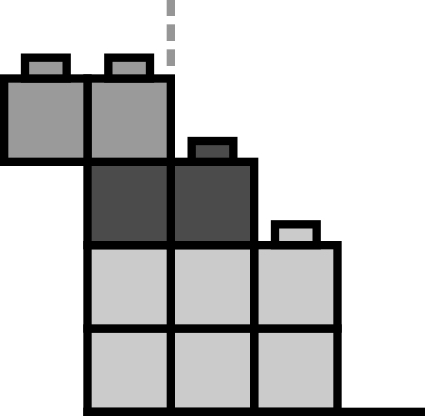 The final block falls after 5 seconds, is 3 centimetres tall, and 1 centimetre wide. Thus the final sculpture will be: 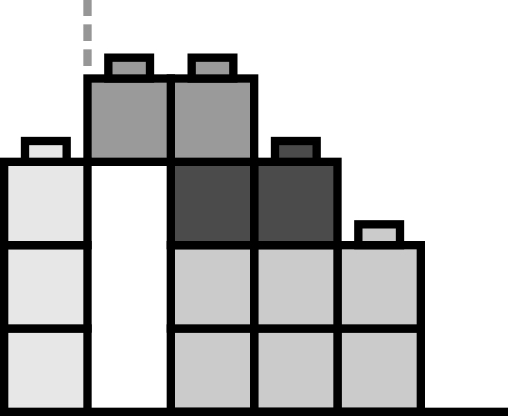 Before you can start shipping your art across the world you must first package it. Specifically you need to determine the maximum height any part of the sculpture will be so that you can order boxes of the correct size. In the above example the sculpture's height is 4 centimetres.

The first line of input will contain a single integer N: the number of blocks in the sculpture.

N lines will follow, the ith of which will contain the integers ti, wi, and hi describing the ith block. You may assume that the blocks will be listed in increasing order of time they are placed, that is t1 < t2 < < tN.

Your program must output a single integer: the height of the sculpture in centimetres.