Output should be a single integer, the location of the mango. You should note that this value might be less than zero.

Thank you for being the scorer for our game of tag. The rules are pretty simple:

As scorer, we need you to figure out how many people are on each team at the end of the game.

The first line of input will contain two integers N and M: the number of players in the game and the number of tags that occur during the game, respectively. M lines will follow, describing the tags that happen in chronological order. Each line will contain two integers a and b. This indicates that player a tags player b, so now player b joins player a's team. It is guaranteed that, prior to this tag, player a is already on a team and player b is not.

You are a snake charmer performing for a travelling circus troupe. For your next act, you will show off your skills by charming your snake to move to a place selected by an audience member. To perform this act, you have created a grid for your snake to move around in. Initially your snake starts off in a square in the middle of this grid facing north, and you will ask the audience for a goal square for your snake to reach. However, your snake is very peculiar: it only likes to move by zigzagging around. More specifically you can only make your snake move in two ways:

For instance, consider the following grid in a coordinate system. 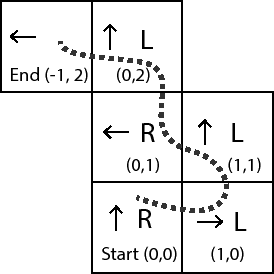 Your snake will always start off at the square (0,0). In the above grid, the flag square at (-1,2) represents the goal square selected by the audience, and the dots show the path taken. The snake is initially facing north, so the sequence of moves taken by it are:

The input file consists of one line with two integers x and y representing the (x,y) coordinates of the goal square.

Your output file should consist of a single line of Ls and Rs, representing a sequence of moves that will charm your snake from the starting point to the goal square.

You've just graduated from high school and are ready to start your very own mad science lab. To prove your genius to the world you plan to breed a lion-goat hybrid.

All animals in existence are fundamentally described by their DNA sequence, which is a string of N upper case letters. You've managed to obtain the DNA sequences of a lion and of a goat. To bring your new creature to life, you must produce a specific DNA sequence, called the hybrid sequence.

There's been a wave of blackouts recently, so to conserve power you want to minimise use of the DNA photocopier. Determine if it is possible to create the hybrid sequence, and if so the minimum number of splices required.

Each string in the input consists only of upper case letters.

It is guaranteed that all three strings in the input will be different.