Compute the sum of all the roots of

According to the standard convention for exponentiation,

If the order in which the exponentiations are performed is changed, how many other values are possible?

Find the degree measure of an angle whose complement is 25% of its supplement.

Each of the small circles in the figure has radius one. The innermost circle is tangent to the six circles that surround it, and each of those circles is tangent to the large circle and to its small-circle neighbors. Find the area of the shaded region.

does there exist at least one positive integer

arc of circle A is equal in length to a

arc of circle B. What is the ratio of circle A's area and circle B's area?

be the total area of the blue triangles,

the total area of the white squares, and

the area of the red square. Which of the following is correct?

Both roots of the quadratic equation

are prime numbers. The number of possible values of

each differ from their reciprocals by

For all positive integers

. Which of the following relations is true?

The mean, median, unique mode, and range of a collection of eight integers are all equal to 8. The largest integer that can be an element of this collection is

, and Sergio randomly selects a number from the set

. What is the probability that Sergio's number is larger than the sum of the two numbers chosen by Tina?

Several sets of prime numbers, such as

use each of the nine nonzero digits exactly once. What is the smallest possible sum such a set of primes could have?

be circles defined by

respectively. What is the length of the shortest line segment

that is tangent to

The graph of the function

is shown below. How many solutions does the equation 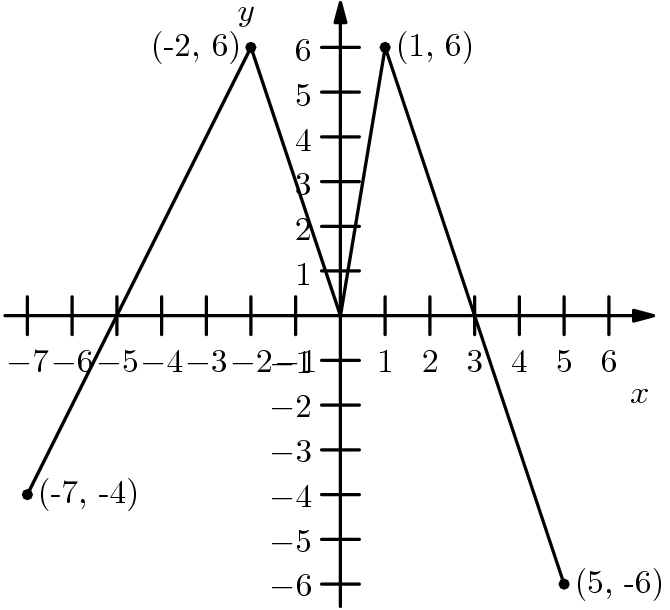 are digits, not both nine and not both zero, and the repeating decimal

is expressed as a fraction in lowest terms. How many different denominators are possible?

Consider the sequence of numbers:

-th term of the sequence is the units digit of the sum of the two previous terms. Let

denote the sum of the first

is a right triangle with

as its right angle,

be randomly chosen inside

and the perpendicular bisector of

, what is the area of triangle

Find the number of ordered pairs of real numbers

The nonzero coefficients of a polynomial

. Which of the following could be a graph of