A bakery owner turns on his doughnut machine at

the machine has completed one third of the day's job. At what time will the doughnut machine complete the job?

A square is drawn inside a rectangle. The ratio of the width of the rectangle to a side of the square is

. The ratio of the rectangle's length to its width is

. What percent of the rectangle's area is in the square?

For the positive integer

denote the sum of all the positive divisors of

with the exception of

bananas are worth as much as

oranges. How many oranges are worth as much as

Which of the following is equal to the product

simplifies to which of the following?

Heather compares the price of a new computer at two different stores. Store

off the sticker price followed by a

off the same sticker price with no rebate. Heather saves

by buying the computer at store

. What is the sticker price of the computer, in dollars?

is an integer. Which of the following statements must be true about

Each of the sides of a square

is bisected, and a smaller square

is constructed using the bisection points as vertices. The same process is carried out on

to construct an even smaller square

While Steve and LeRoy are fishing 1 mile from shore, their boat springs a leak, and water comes in at a constant rate of 10 gallons per minute. The boat will sink if it takes in more than 30 gallons of water. Steve starts rowing toward the shore at a constant rate of 4 miles per hour while LeRoy bails water out of the boat. What is the slowest rate, in gallons per minute, at which LeRoy can bail if they are to reach the shore without sinking?

In a collection of red, blue, and green marbles, there are

more red marbles than blue marbles, and there are

more green marbles than red marbles. Suppose that there are

red marbles. What is the total number of marbles in the collection?

Doug can paint a room in

hours. Dave can paint the same room in

hours. Doug and Dave paint the room together and take a one-hour break for lunch. Let

be the total time, in hours, required for them to complete the job working together, including lunch. Which of the following equations is satisfied by

Older television screens have an aspect ratio of

. That is, the ratio of the width to the height is

. The aspect ratio of many movies is not

, so they are sometimes shown on a television screen by "letterboxing" - darkening strips of equal height at the top and bottom of the screen, as shown. Suppose a movie has an aspect ratio of

and is shown on an older television screen with a

-inch diagonal. What is the height, in inches, of each darkened strip?

lie on a circle centered at

. A second circle is internally tangent to the first and tangent to both

. What is the ratio of the area of the smaller circle to that of the larger circle?

An equilateral triangle has side length 6. What is the area of the region containing all points that are outside the triangle but not more than 3 units from a point of the triangle?

A right triangle has perimeter 32 and area 20. What is the length of its hypotenuse?

lies in a plane with

. The rectangle is rotated

clockwise about the point

moved to after the first rotation. What is the length of the path traveled by point

and diagonals intersecting at

. What is the area of trapezoid

A cube with side length

of two opposite edges not containing

, as shown. What is the area of quadrilateral 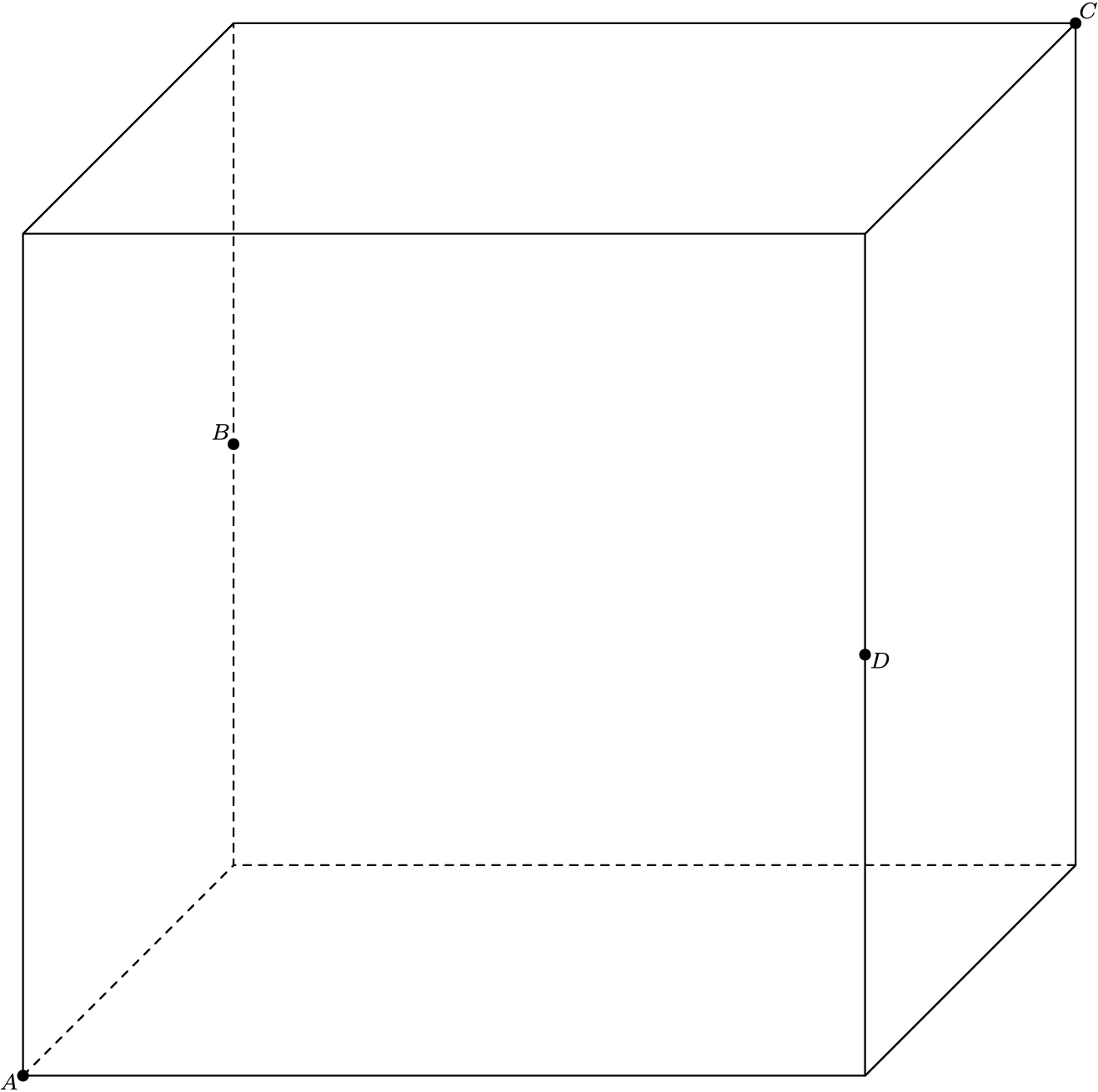 Jacob uses the following procedure to write down a sequence of numbers. First he chooses the first term to be 6. To generate each succeeding term, he flips a fair coin. If it comes up heads, he doubles the previous term and subtracts 1. If it comes up tails, he takes half of the previous term and subtracts 1. What is the probability that the fourth term in Jacob's sequence is an integer?

Two subsets of the set

are to be chosen so that their union is

and their intersection contains exactly two elements. In how many ways can this be done, assuming that the order in which the subsets are chosen does not matter?

. What is the units digit of

A round table has radius

. Six rectangular place mats are placed on the table. Each place mat has width

as shown. They are positioned so that each mat has two corners on the edge of the table, these two corners being end points of the same side of length

. Further, the mats are positioned so that the inner corners each touch an inner corner of an adjacent mat. What is 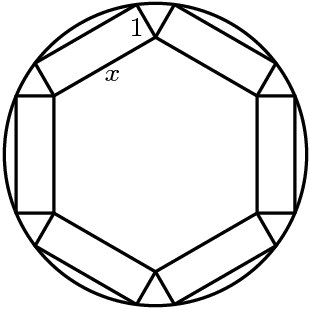