Danica wants to arrange her model cars in rows with exactly 6 cars in each row. She now has 23 model cars. What is the smallest number of additional cars she must buy in order to be able to arrange all her cars this way?

A sign at the fish market says, "50% off, today only: half-pound packages for just $3 per package." What is the regular price for a full pound of fish, in dollars?

Eight friends ate at a restaurant and agreed to share the bill equally. Because Judi forgot her money, each of her seven friends paid an extra $2.50 to cover her portion of the total bill. What was the total bill?

Hammie is in the

grade and weighs 106 pounds. Her quadruplet sisters are tiny babies and weigh 5, 5, 6, and 8 pounds. Which is greater, the average (mean) weight of these five children or the median weight, and by how many pounds?

The number in each box below is the product of the numbers in the two boxes that touch it in the row above. For example,

. What is the missing number in the top row? 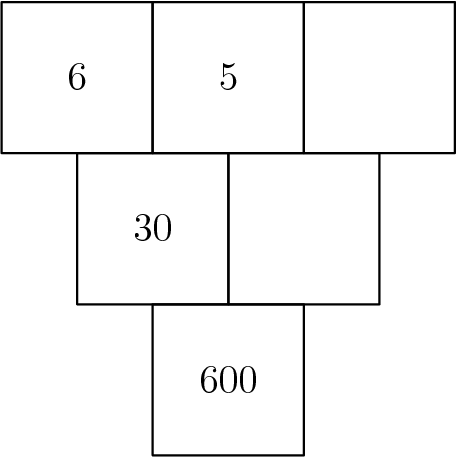 Trey and his mom stopped at a railroad crossing to let a train pass. As the train began to pass, Trey counted 6 cars in the first 10 seconds. It took the train 2 minutes and 45 seconds to clear the crossing at a constant speed. Which of the following was the most likely number of cars in the train?

A fair coin is tossed 3 times. What is the probability of at least two consecutive heads?

The Inedible Bulk can double the distance he jumps with each succeeding jump. If his first jump is 1 meter, the second jump is 2 meters, the third jump is 4 meters, and so on, then on which jump will he first be able to jump more than 1 kilometer?

When Clara totaled her scores, she inadvertently reversed the units digit and the tens digit of one score. By which of the following might her incorrect sum have differed from the correct one?

, what is the product of

A number of students from Fibonacci Middle School are taking part in a community service project. The ratio of

, and the ratio of

. What is the smallest number of students that could be participating in the project?

The sum of six consecutive positive integers is 2013. What is the largest of these six integers?

Isabella uses one-foot cubical blocks to build a rectangular fort that is 12 feet long, 10 feet wide, and 5 feet high. The floor and the four walls are all one foot thick. How many blocks does the fort contain? 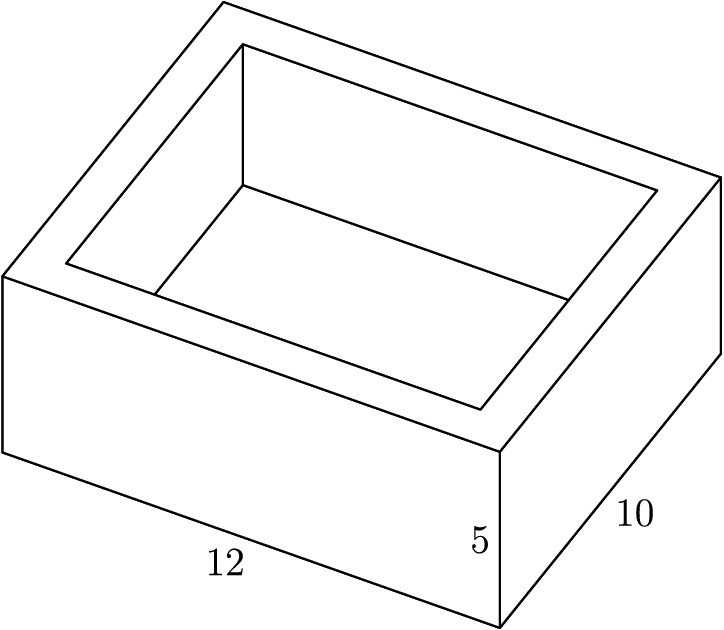 rectangle is inscribed in a semicircle with longer side on the diameter. What is the area of the semicircle? 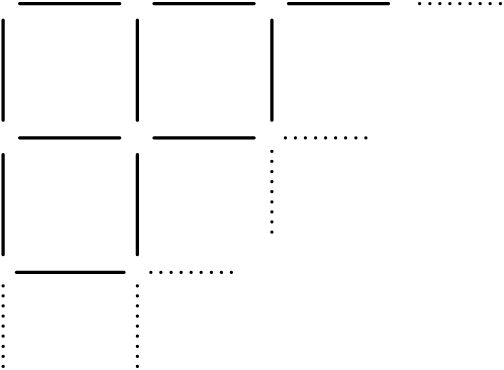 is a right angle. The sides of

are the diameters of semicircles as shown. The area of the semicircle on

, and the arc of the semicircle on

. What is the radius of the semicircle on 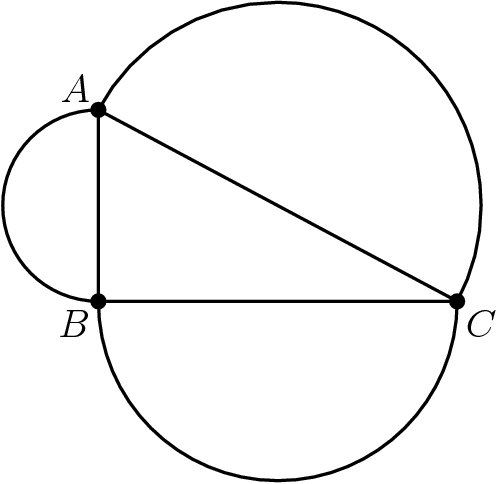 are equal in area. Points

are the midpoints of sides

, respectively. What is the ratio of the area of the shaded pentagon

to the sum of the areas of the three squares? 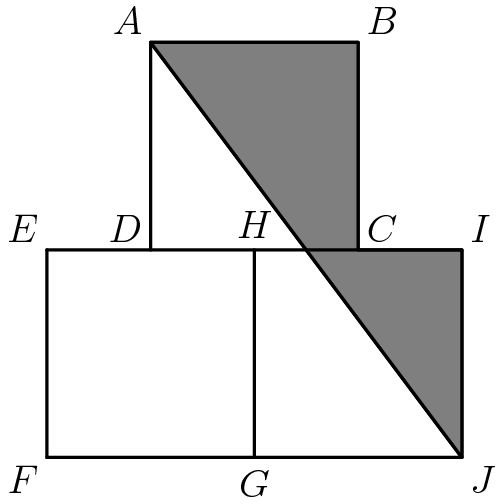 A ball with diameter 4 inches starts at point A to roll along the track shown. The track is comprised of 3 semicircular arcs whose radii are

inches, respectively. The ball always remains in contact with the track and does not slip. What is the distance the center of the ball travels over the course from A to B?