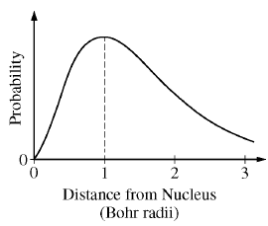 1）The graph above describes the location of an electron in a hydrogen atom that is in the ground state. What conclusion can be drawn from the graph?

9）A rectangular loop of copper wire is attached to a cart by an insulating rod. The cart is moving at constant speed when it enters a region containing a uniform magnetic field that is perpendicular to the plane of the loop and directed into the page, as shown above. Frictional losses are negligible. Which of the following correctly describes the speed of the cart as it moves into, through, and out of the field?