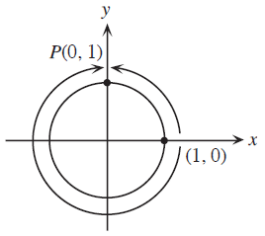 Using the same reasoning, the particles will meet at Q(−1, 0) when they meet the second time.