8)In the diagram, D ABC is equilateral and the radius of its inscribed circle is 1. A larger circle is drawn through the vertices of the rectangle ABDE. What is the diameter of the larger circle? 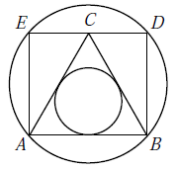